Maureen Quin: "The Hunt" speech at Exhibition opening in Sweden

Maureen Quin is an award-winning artist in both Europe and South Africa, where she has her roots. In this famous HUNTING SERIES from 1990 ‘s she captures the light and the dark depths of the human soul in a wonderful power game of innovative forms. Hunter, constantly associated with her cheetah: the faithful companion in the form of jaktleopardens smooth beautiful gestalt-words in each sculpture its own truth. Initially searched for Maureen Quin just give shape to “Hunter and his cheetah. Subsequently developed the sculptures into a coherent sequence that involved the entire humanity’s constant quest – the quest for power, glory, fame and fortune. We hunt all the time through life – afterwards it becomes an internal search to find the right in ourselves. Companion grows together with the Hunter and symbolizes his surroundings.

Quin expresses her dismay at man’s inhumanity against his fellow man-desire to destroy their environment, driven by desire, greed, development, self-satisfaction. J-gargestalterna has huge muscles – physical strength-but heads are small. Man is a bit too spontaneous, and makes their tangents without thinking. Different feelings on good and evil, life: mankind’s strong aggression, the urge to destroy our environment, to kill our fellow human beings, hatred, war, and violence – and its consequences: pains, anxiety, fear, remorse, despair, grief and remorse. These are followed eventually by desire for reconciliation, adoration- approach to higher heavenly powers- joy, love and forgiveness. New hope for humanity is about to destroy itself?

African myths mixed with spirituality, figurative forms with abstract, three-dimensional with exciting spaces. Even empty rooms designed. The realism turns sometimes to absurdities with surreal ambiguous interpretations. Everything is collected into an aesthetic unit of rhythms -of surprisingly fantastic compositions.

1. BUSHMAN 1991: the exciting space between the Hunter’s reflexed stance against the long bow and his sagformade jagged spine underlines a certain arrogance and pride. But he’s still innocent.
2. HUNTER 1993: Bush man -belonging to an almost obliterated cultural group in Africa-are here counties with her cheetah (jaktleoparden which also symbolizes the surroundings)-while this on its way to extinction. This human and animal hunted ruthlessly. Both go under and be killed. The sculpture is about racism, destructive and inhuman rampage in the world.
3. CHASE I 1995 (hunting): the sculpture that moves at full speed forward almost looks to fly. He rests only lightly on the front right leg. Exciting balance between the two parallel lines of heads. This implied the mythological “Golden Horn”. Myth and reality are combined with stress. We do not have time to stay up in the moment and enjoy life without living in constant framatstravan and inner struggle. The time is not enough.
4. CHASE II 1995 (PROWL II): This is the man and the animal – thoughtfully-stalls to be able to control the situation-ready for a new leap! They are fused and expresses a strong inner tension and energy. The man’s Golden horns pointing forward to attack as well as the expression of the animal’s tail.
5. 1992 HUNTED (CHASED): according to Maureen Quin was born this sculpture to still an inner agitation. This riding an innocent man into perdition, meet in the middle of the chest by an arrow, slow down erratically and dies. Maybe he was unaware of the threat – an internal threat? Perhaps he sought to fight off evil forces? He looks like a crucified up there in space? The horse’s neck and tail shapes with arrow an aggressive trio.
6. THE KILL 1996 (the KILLING): A slain man is hanging around the Hunter’s shoulders. The weight of the arms, legs and head are linked in chaos and mixed with the moral weight of guilt, so that the animal in man and the dead arched. Everything has a spiritual reference.
7. PIETA 1996 (HAVE MERCY!): The Hunter (man) sits on his chair, leaning forward, grief-stricken over the death of his companions. He is now like a child in his lap – symbol of a dying humanity. Quin spoke of an Africa that is being destroyed from within. -Vertebra leads down to the large Golden Horn-upside-down-where humans and animals – this symbol of our surroundings-grow together and become one. A world about to be destroyed! The sculpture forms a rhythm of forms around the pain.
8. GRIEF 1996 (SORROW): kneeling-in sorrow and outcast-man lifts his arms to the sky and seeking solace and forgiveness. The Golden Horn pointing down expresses guilt and despair.
9. REMORSE 1998 (REMORSE): kneeling envelops the man’s head with the Golden Horn pointing forward. Humble, burdened by its broad shoulders and overwhelmed by remorse, he seeks reconciliation.
10. DEVASTATION 1998 (DESPAIR): back at the knee with bowed head, the burdened the burden and the open awkward hands-seeking human solace while horn pointing down in despair.
11. 1998 the SUPPLICATION (WORSHIP – INVOCATION): kneeling-leaning forward in prayer position-call upon the human being his creator of deep devotion and ask forgiveness. Vulnerable and exposed looks back to the echo of pain. The sculpture radiates deep spirituality.
12. THE ULTIMATE SACRIFICE 1999 (the ULTIMATE DECISIVE SACRIFICE): Mary sits with the infant Jesus and the crucified Christ in one and the same figure. This WINS the love and forgiveness -and Maureen Quins deep spiritual faith shines brightly in this sculpture that reflects the child’s innocent victim Jesus to spread the love and forgiveness between people. Maybe an attempt to save the world.

In the face of the sculpture the force 14 games at this exhibition of collaborative innovative rhythms, we experience a spiritual trek through a multitude of powerful human emotions. A Trek from darkness to light, from the destructive instincts of deep spiritual faith and a higher presence of helping forces that put away all concerns.

Although our Crowdfunding did not reach its goal, there were many kind people who supported Maureen’s Capitec Fund. We would like to thank you all for your wonderful support. These contributions funded printed brochures and postage, and other miscellaneous costs. A very special client has bought work from Maureen, ensuring she had funds available to cover the costs of the European exhibitions.

On the 27th of April 2017 Maureen Quin, dressed in traditional Xhosa attire, attended the Freedom Day festivities at the South African Embassy in Berlin as a guest of the Ambassador, His Excellency Mr Stone Sizane, originally from Alexandria, where his family still resides. Mr Sizane was a regular visitor to the Quin Sculpture Garden while he was based in Alexandria. The “Hunt Series” was exhibited at the South African Embassy, Berlin, for the day of the 27th April 2017 where it was viewed by invited guests.

On 4 May the exhibition opened in Neustadt, north of Hamburg on the Baltic Sea coast, where it was on view for two weeks, to great acclaim.

The exhibition traveled to various exhibition centers in Germany, before returning to South Africa.

Once again, we would like to express our appreciation and gratitude for the generous support. 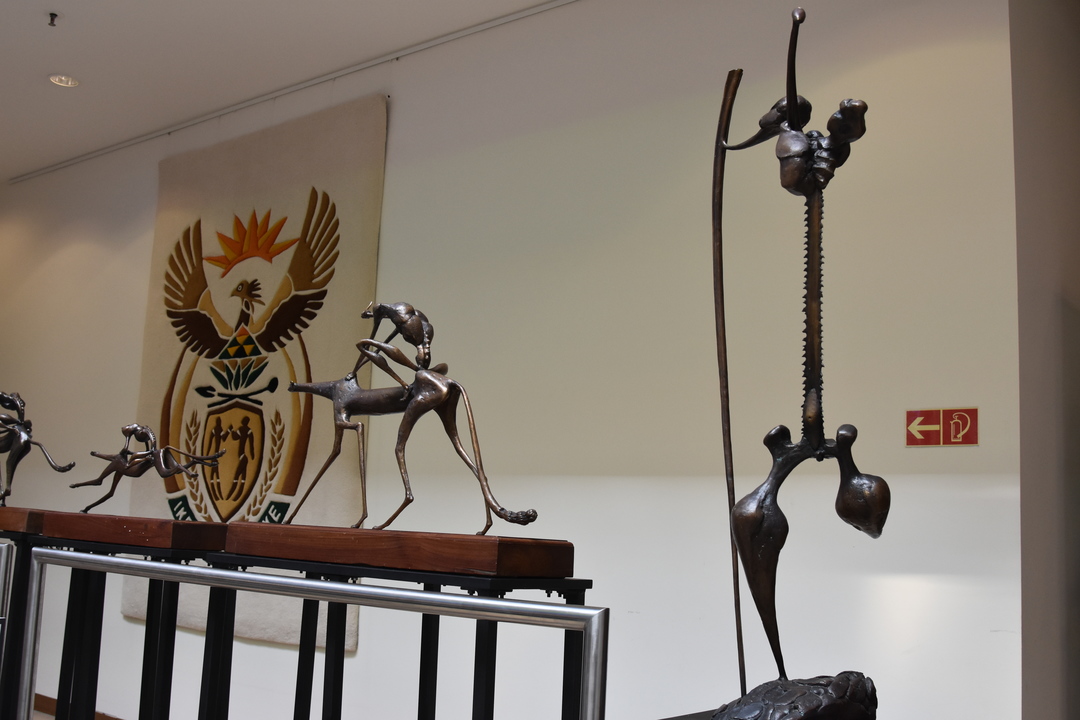 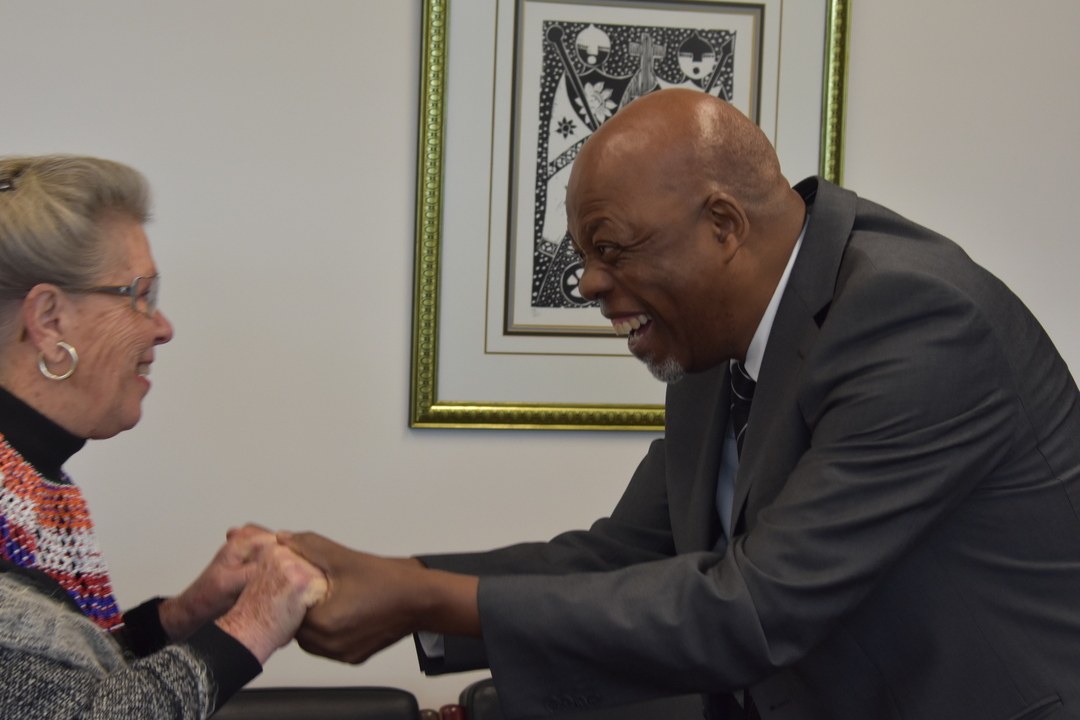 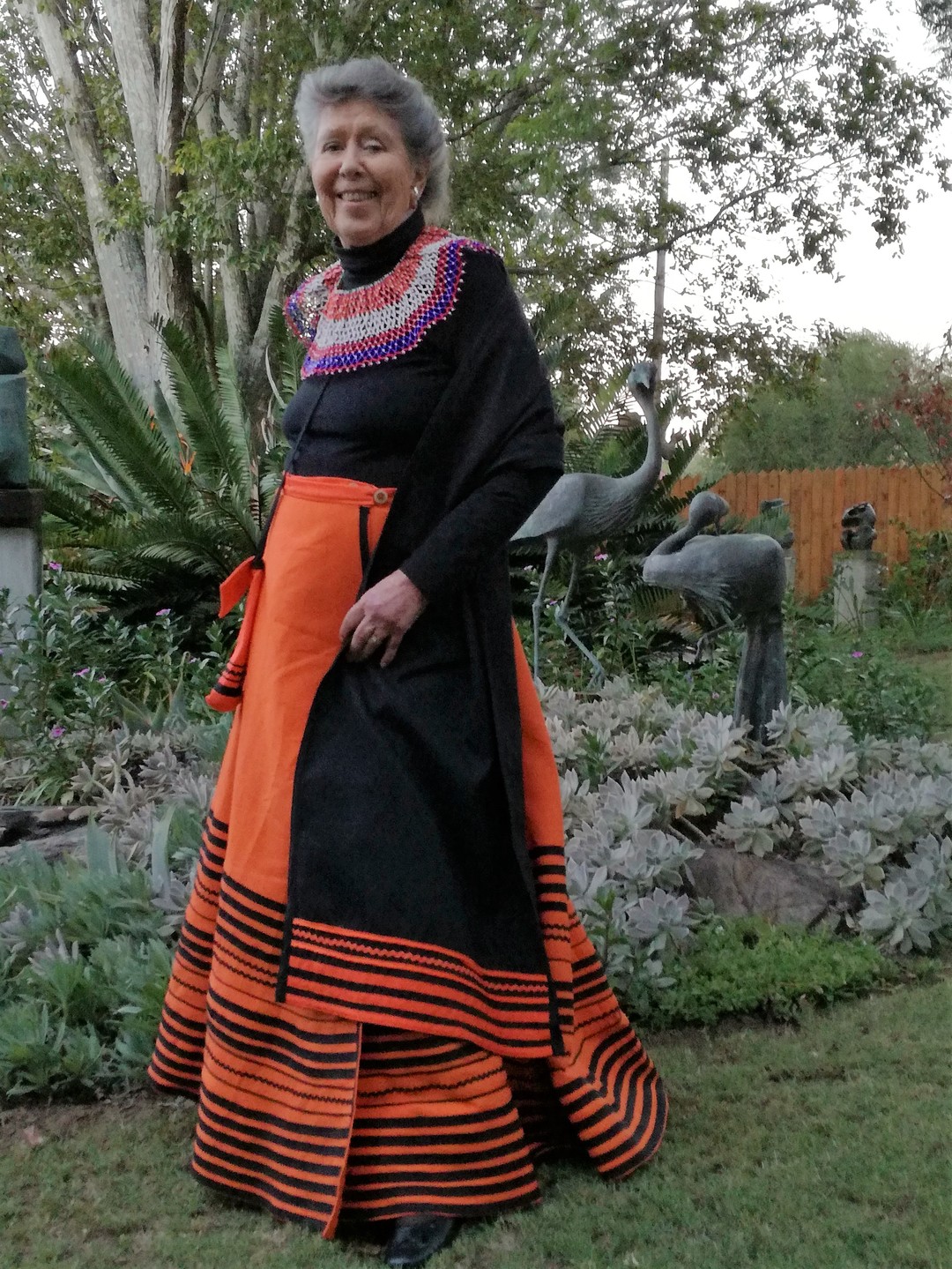 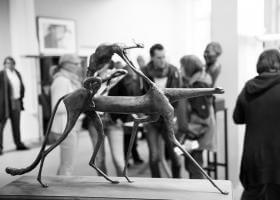 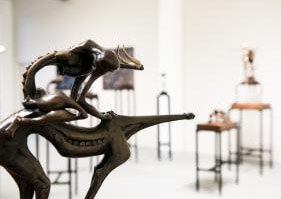 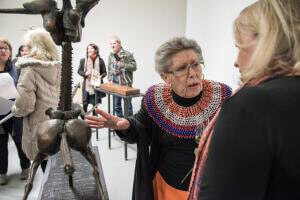 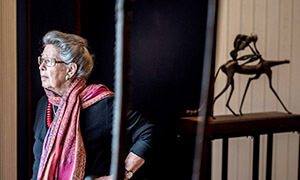 This is a group of sculptures, which has become known as “The Hunt”, occupied Maureen creatively over a period of 8 years. It was never pre-planned as such, but grew, one idea generating another. Maureen tried to express, in a sculptural form, the horror she feels for man’s inhumanity to his fellow man compounded with the wanton destruction of our environment in the name of development, greed, power and self-gratification. These are not unique thoughts. However, the sculptural solution was not easy. Maureen explored many avenues before finally finding a way to express the vision that she desperately wanted to portray in a tangible form.

Art lovers and collectors have time and time again attested to the impact these sculptures have had, and the value of their sculptural form in the landscape of sculpture. 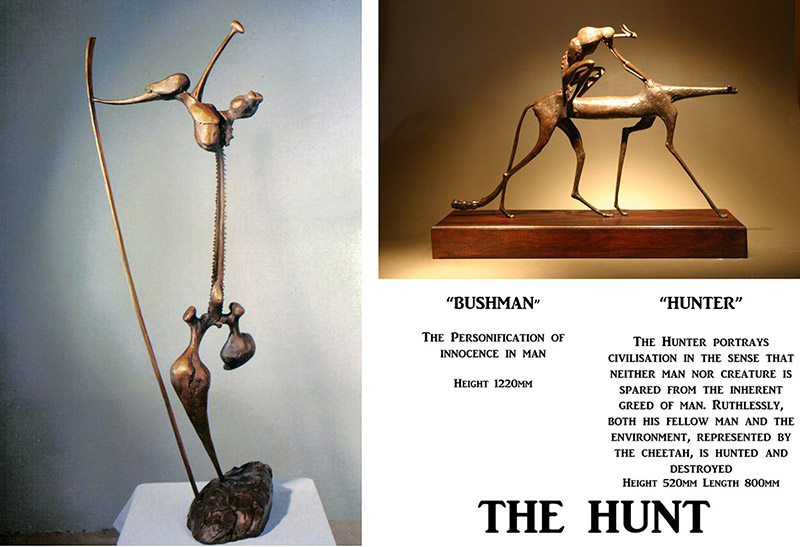 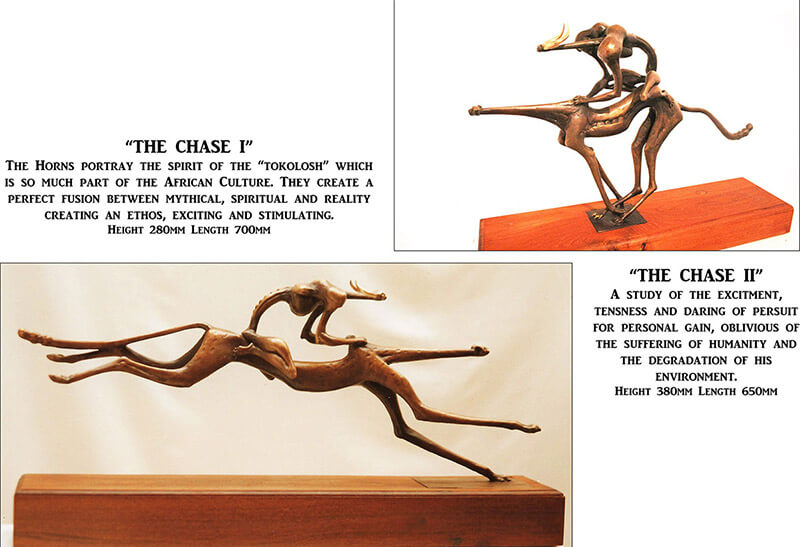 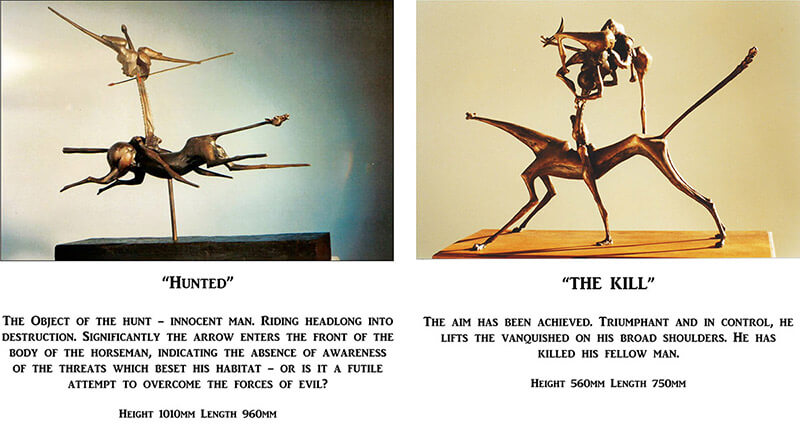 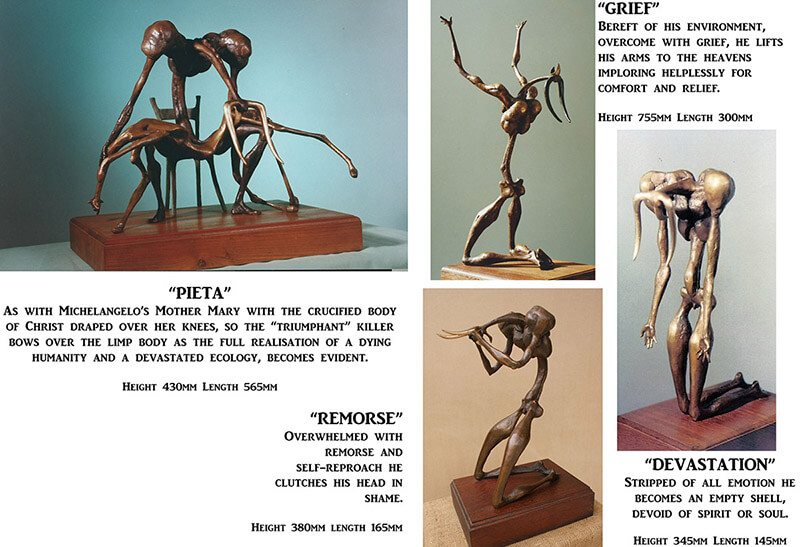 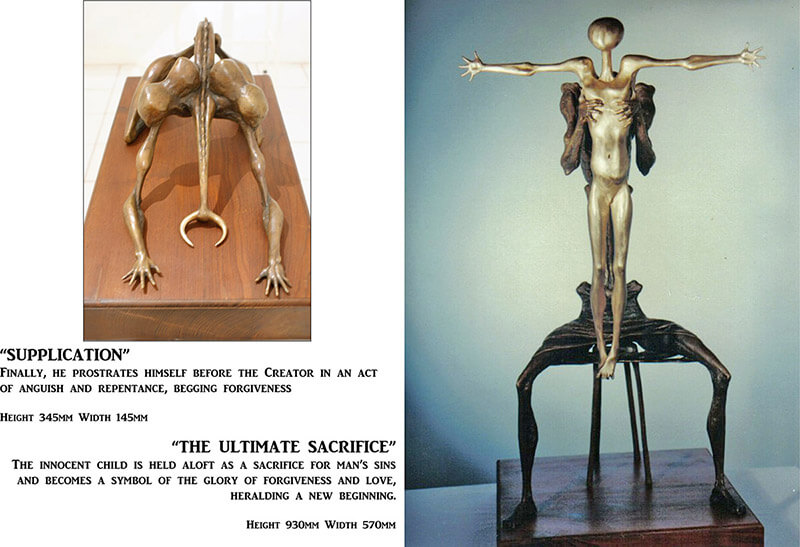 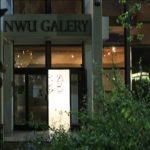 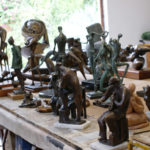